Katy History and the Beginnings of a Booming City

Katy History – The location of the bustling city of Katy, TX, was once a vast field of sugar cane plants, presumably seeded there by early forgotten trappers to aid in luring the animals. Since all around the sugar cane there was nothing but wide, endless prairie, it came to be called “Cane Island”, located as it was in a sea of grass. 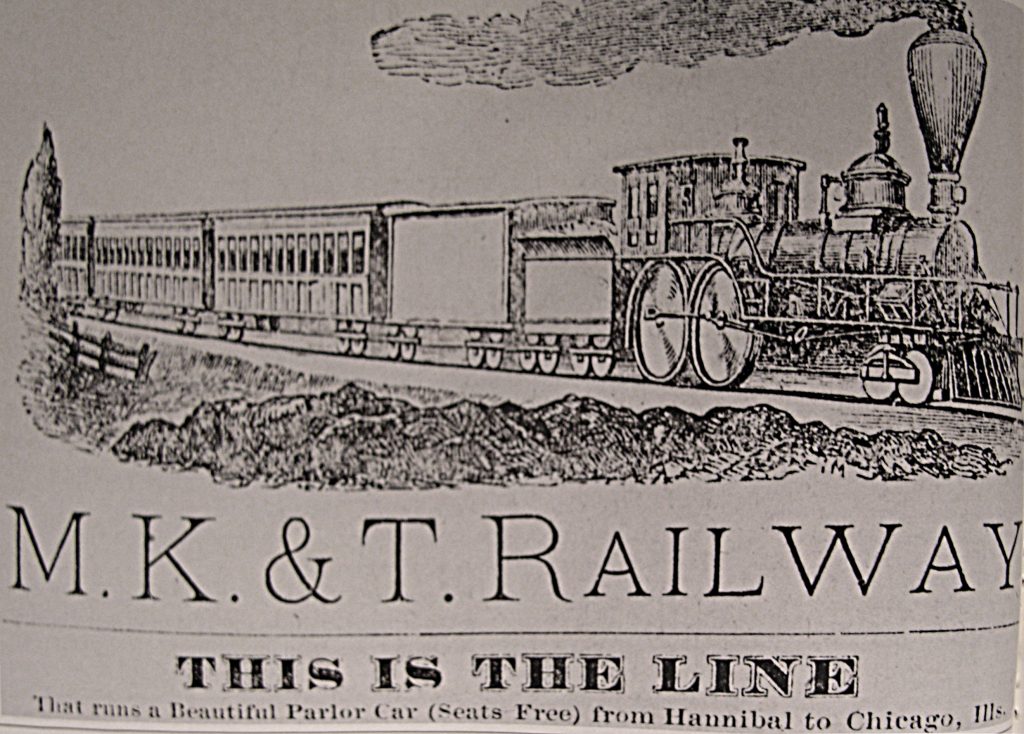 In 1846, a trail was created between the towns of Harrisburg and San Antonio, TX. It was the beginnings of the San Felipe Road, and it ran straight through the sugar cane field. Cane Island was the location of a small stagecoach stop for travel-weary passengers.

In 1845, Cane Island was included in a land grant for James J. Crawford, who tried to colonize the land with settlers. To no avail; the location was too out of the way. Only a handful of people trickled in, most of them former slaves seeking a quiet, obscure locality where they could live in peace.

It wasn’t until the railroad arrived that things got Katy history moving.

In 1893, Cane Island became a hive of bustling activity when one of the United States’ largest railroad companies, Missouri–Kansas–Texas Railroad, chose to lay their tracks straight through the heart of the tiny settlement forever changing Katy history.

Since the location had no official name yet, railroad officials simply referred to it as “KT”, short for “MKT”, abbreviation for Missouri-Kansas-Texas Railroad. Apparently, that is why the place is called Katy today. (An alternative account suggests it was named after the first saloon keeper’s wife, Katherine.)

Seeing that the fertile land would make a good settlement area, with the approaching railway solving any further problems, surveyor Milton August Beckendorff got to work straight way. He and his partners began plotting the grounds for the development of a town. By the time MKT had finished their project, the county lines had been determined and all was ready to go.

As the first trains rumbled through “KT”, an ambitious man named James Oliver Thomas decided to get the pregnant town on the rails, so to speak. He plotted out the area in detail, and in 1896 he applied for a post office to be opened, raising the location from settlement to the status of official town. The state approved, and on January 23, “Katy” became a legitimate, legally recognized town of Katy history.

The hunch that the town and Katy history would be a success was well-founded and became Katy history. Soon, interested prospectors started pouring in, mostly from Illinois, Missouri, and Iowa.

This was chiefly due to the persistent efforts of one Adam Henry Stockdick, hired by MKT to promote the new town and get it populated. Stockdick knew the advertising business and placed ads in newspapers promising splendid orchards, flourishing crops, and booming oil business, if only the reader would move to Katy, TX. However, he was very careful to avoid advertisement in the summer; it was better not to have a potential buyer experience the heat and mosquitoes too soon, according to Rosanne Stockdick Lopez, his great-granddaughter, in the Katy Magazine.

Stockdick didn’t just promote; he organized the land sales, staked out properties, drew up legal documents, and stuck by his buyers. By 1990, a large number of families had arrived and had started farms in the location. The town had a saloon, a grocery store, and two hotels, the Katy Hotel and Hotel Clardy.

Things were just getting settled in 1900 when the worst hurricane ever in recorded United States’ history swept down on the little town. Named after the Texas city it damaged the most, Galveston, the Category 4 Storm delivered 145 mph winds and ravaging floods. With a death toll of between 6,000 to 8,000 people, it was and remains the nation’s deadliest hurricane. Only 78 miles’ distance from Galveston, Katy suffered devastation as farmland was underwater, homes were swept away, and all businesses were destroyed. The town was practically ruined.

Some of the newly arrived pioneers decided to return to their home states after the disaster had obliterated all their hard work. But others stayed and started over. Gradually, houses rose up once more and work got back underway as land reappeared from underneath the slowly receding floodwaters. Property was still being sold shortly after the storm. One settler, George Weinmann, found his newly purchased land knee-deep in water when he arrived. He had to change several of his plans about where to build his house.

William Eule, a German immigrant, was the first to initiate rice farming in the area changing Katy history. Soon it was obvious that rice flourished in Katy’s rich soil, and other farmers joined in the growing and harvesting of bumper crops. Rice replaced peanuts and cotton as the usual Texan harvest, and the rice produce had an important impact on the town’s economy and development. Katy still has rice farms to this day, and celebrates its heritage and Katy history in the annual Katy Rice Harvest Festival.

The First Schools of Katy, TX

The new kind of crop wasn’t the only thing that the Eules introduced. They also started Katy’s first school in their own home, soon collaborating with another German family, the Schilpfs, to build the first actual schoolhouse on the Schilpf’s land.

Other families near-by copied, and the settlers’ children began attending various tiny one-room schoolhouses on various private properties throughout the town. Namely, there was the Schlipf School, the Dishman School, the Cobb School, and the Sills School.

By 1904, Katy has a population of 119. It was still going strong, and 1918 saw creation of the first school district, Katy Independent School District, which brought an end to privately run schoolhouses on the farms. In the same year, Katy acquired its first town bank.

Along with rice farming, another industrial backbone of present-day Katy history is oil. That began in 1934 with the discovery of the first near-by oil well, and the area became a booming oil hot spot a less than a decade later when WWII caused oil demand to go up. The population doubled within months due to the swelling economy; in 1942, the head count was 400 residents; in 1943, the count was 800. In 1945, the city of Katy was incorporated, causing a steady increase of newcomers. By the 1980’s, Katy had a population of 10,000.